A food processing plant in the Midwest experienced large snow loads on their roof this past winter.  The snow drifted up against the wall of a taller section of the plant causing extreme fatigue on the roof and a small section of roof finally collapsed from the weight.  The plant engineers began searching for a solution to prevent this from happening again. After analyzing the options they turned to Warmquest to provide a roof deicing system that would keep the snow from collecting and drifting up against the plant wall.  The plant engineers sent Warmquest detailed layouts of the roof section they wanted to be heated. The total area they desired to have heated was approximately 340’ long and totaled over 5,300 sqft. Warmquest designed a low voltage system using 9” ZMesh that would provide the required heat and efficiently cover the total square footage.

Working in conjunction with the plant engineers, electricians, and roofing contractor a plan was developed to properly install the roof de-icing system.  Warmquest provided recommendations for the location of the control units, selector boxes, and temperature activation devices, along with a recommended layout for the ZMesh.

The plant electricians installed stainless steel NEMA enclosures to house the control units, transformers, selector boxes, and temperature sensors. After the control units were in place it was then time to coordinate with the roofing contractor to remove the existing roof materials. It was determined that the best option was  to remove the roof in smaller sections that could be completed each day with time for the roofing contractor to install a temporary water proof barrier to protect the roof before leaving the job site.  The roofing contractors removed the first section of existing membrane roof and then replaced the existing insulation if needed.  The electricians brought the cold leads from the control units down through the insulation to the locations needed to make the connections with the ZMesh. New ½” gypsum-fiber boards were then glued down to cover the insulation and provide a solid surface for installation of the ZMesh. Holes were cut in the gypsum-fiber board to allow for the cold leads to be able to make the connections to the ZMesh. Using the recommended layout as a guide, lines were chalked for the installation of the ZMesh to help ensure proper spacing between the runs. The layout for each loop of ZMesh was then measured before installation to ensure that the length was in between minimum and maximum length for the transformer being used. Each loop of ZMesh was then installed and fastened to the gypsum-fiber board with hammer staplers to prevent movement.  The cold lead and ZMesh were then connected to the transition plates and the transition plates secured to the gypsum-fiber board. Because ZMesh is an uninsulated bronze it’s important to make sure it does not come into contact with any metal thus preventing any shorts that may occur. A roof alarm is designed to detect continuity between the ZMesh and surrounding metal and was used throughout the installation of the Zmesh. After element installation testing was then performed and recorded. The roofing contractors then glued down a ½” sheet of gypsum-fiber board over the top of the ZMesh to protect the ZMesh and provide a solid surface to adhere a new layer of membrane roofing.  Follow up testing after each section of roofing material was installed and measurements compared to the first testing. This process was repeated over several days until all of the ZMesh and membrane roofing material was completed.

After completing the installation, each control unit was started up and tested.  The entire system will activate by a pair of temperature sensors and are set to activate when the temperature drops below 38°F. 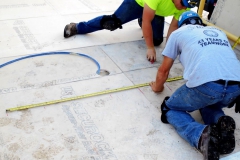 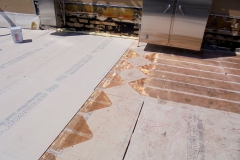 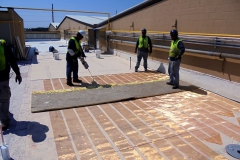 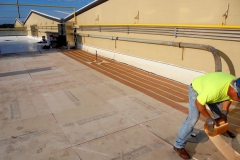 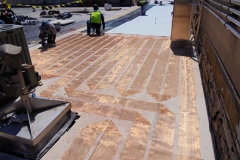 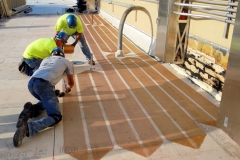 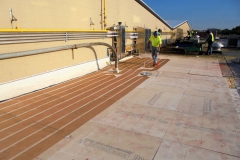 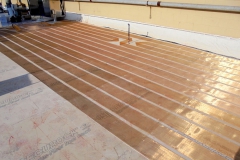 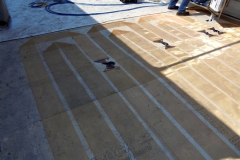 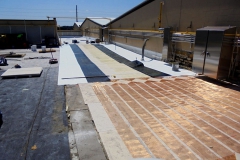