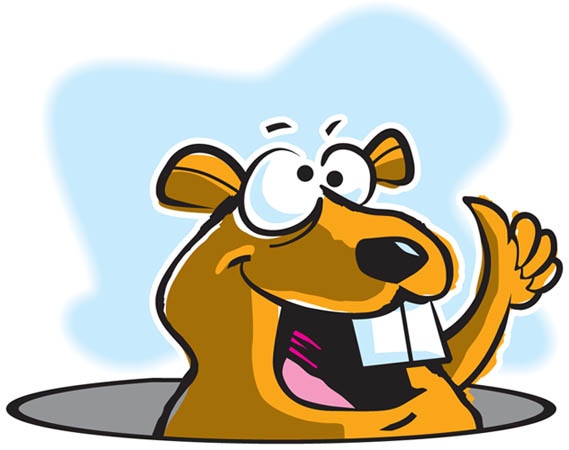 If you haven’t heard by now, the groundhog did not see his shadow, which according to tradition means we can all look forward to an early spring.

In honor of this annual tradition, we thought we’d take a look at the origins of Groundhog Day and the furry weather forecaster himself.

Who is the Groundhog?

The best known groundhog is Punxsutawney Phil. Headquartered in Punxsutawney, Pennsylvania, Phil’s forecast is widely reported, and the associated festival is the largest of its kind. Phil did not see his shadow this year, and an early spring was predicted even though it was 22° outside.

Punxsutawney Phil is not alone in his predictions however. Staten Island Chuck, General Beauregard Lee, Woodstock Willie, and Shubenacadie Sam all agree with Phil at the time of this writing, with Dunkirk Dave and Buckeye Chuck dissenting after seeing their shadows.

Historians have tied Groundhog Day’s origins to ancient European lore, including Imbolc, an ancient Pagan festival. This festival was also celebrated on February 2nd, which is the halfway point between the Winter Solstice and Spring Equinox.

Early references to Groundhog Day tied together this midwinter celebration, with the belief that a sunny February 2nd meant six more weeks of winter, while clouds meant an early spring. In Europe a badger or bear was watched as it emerged from hibernation to see if a shadow would appear.

Take these ideas, swap the badger or bear for a groundhog and a new tradition was born. Some credit should be given to these Groundhog Day pioneers for having the foresight to choose an animal that was much easier to carry about and showcase on television that a bear or badger. That said, we don’t recommend going out and playing with a groundhog.