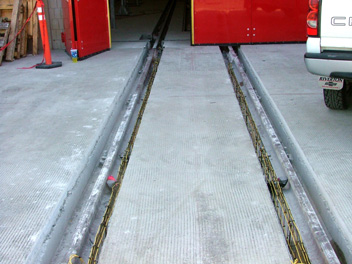 When the UTA light rail constructed a train wash, one of the concerns was keeping the tracks near the wash from icing up in the winter. With the constant presence of water from the wash, derailing due to ice was a concern. Warmquest was able to design a snow melting system tailored to the needs of this project.

Low voltage Tuff Cable was selected for the project. UTA chose this option based on the longevity and history of the cable, coupled with its 25 year warranty and ease of installation. 300’ of Tuff Cable was installed. This allowed for heating approximately 50’ of the rails approaching the train wash.

The cable was attached to welded wire mesh which was custom cut to fit along the rail. 3 runs of cable were installed alongside the rails in order to effectively heat the area. The runs were spaced 1” apart allowing the system to generate 46 watts per square foot of heat. This ensures that ice will not buildup on the rails impeding use of the train wash. The system was powered by a CBX6 control unit featuring a 3kVa transformer.

This system is activated by a temperature sensor which toggles the system on when temperatures fall below a certain point. This is more effective in this application than a temperature and moisture sensor, as the train wash is consistently wet. A manual timer was also installed to allow manual control and override of the snow melting system.